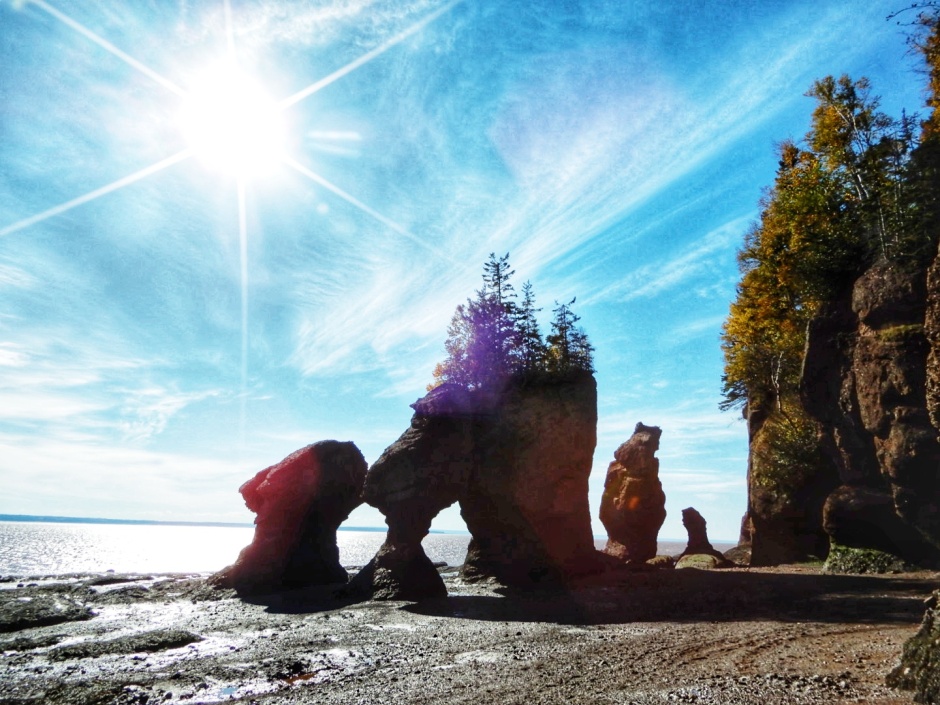 My main goal in travelling to New Brunswick was to see the Bay of Fundy and the Hopewell Rocks. This had been a bucket list item for me for quite some time. After doing some research and discovering that the Hopewell Rocks are only a 3 hour drive from Halifax, I knew I had to go.

After my exhausting but amazing day in Nova Scotia, I made sure to set my alarm to wake early the next day so I would have plenty of time to make the 3 hour drive to the Bay of Fundy and be able to witness the Hopewell Rocks at low tide. There is a small window of only a few hours where one can walk on the sea floor to explore the beach around the rocks.

The day I arrived just so happened to be the day after the park officially closed for the season. Not to fret because as you will find out with some simple research on their website, visitors can still enter the park (free of charge) but you can’t park in the parking lot at the front gate. You have to either walk down the road (maybe 7 minute walk) or drive down a back road to another parking lot. The second option proved to be the better since the only thing at the front gate was the restaurant and interpretive centre which were closed.

Arriving 1 day after the park had closed meant 1 big benefit… less people. There were no large tour buses filled with people and I was able to capture some great photos with no people in them. There were points when I felt like I was the only person on the beach. Like I mentioned before there is only a short window where people can walk on the sea flood before the tides rush back in. Because the park was officially closed for the season, this meant I had to be very aware of the tide times. There was a few park staff who were on the beach removing the safety ropes who I stopped to talk to briefly who mentioned to me that the tide can come in so quickly that in certain spots on the beach, you think the tide is far away and the next minute you are trapped. Being there in the off season means no one is going to help you if that happens.

The large rock formations are 40-70 feet tall and are made of red sandstone. Walking on the sea floor it is truly amazing how large and unique these rocks really are. Carved out from millions of years of water and wind erosion, it is easy to see why it has been deemed a Natural Wonder of the World. In one area of the Bay of Fundy, where the bay meets the Saint John River, a unique phenomenon happens where the flow of the river actually reverses.  This is knows as the Reversing Falls Rapids. During low tide, the river empties into the bay causing a series of rapids and whirlpools, as the tide rises in the bay, it gradually reverses the flow of the river and again rapids form peaking at high tide. Remarkable!

Wanting to witness both low and high tide (11:30AM and 5:22PM), I planned ahead and packed a lunch. The weather was quite nice that day (sunny and 14C) so I was able to find a spot on the picnic tables and relax to enjoy the views. At around 4:30PM, I made my way back down to the beach via a wooden plank walkway only to discover the water had already risen so high that it looked like a completely new area. The only place to safely watch the tides come in was at the iconic spot with the metal staircase leading to the beach. Here I could stand on the staircase and watch as the tide rushed in. Now when I say rushed in, it was almost that. Using a series of rocks as my guide, I timed how long it took for the water to move up 1 foot on the beach. 1 foot per minute was the rate I discovered. I went from standing on the beach to only being able to stand on the staircase because the water had completely covered the bottom few steps. At its highest the tides can reach a whopping 5 stories high!

This was truly an amazing experience to witness Mother Nature at her finest. I am always in awe how the Earth, without any human interaction can create such beautiful and amazing scenery.

Where Am I Going?

To Be Determined (any suggestions?)